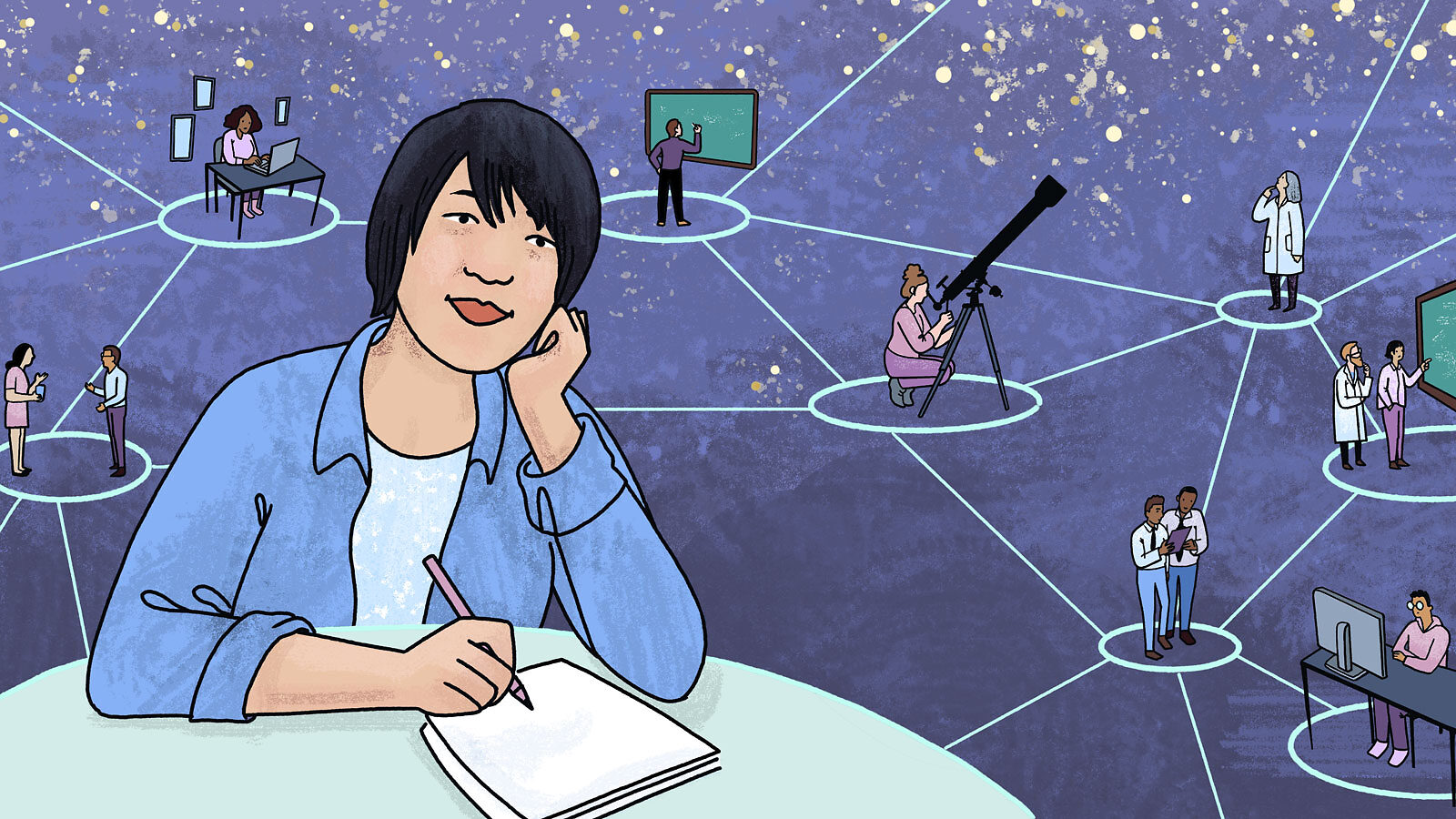 The human side of science

The summer of 2019 was a pivotal one for Sal Wanying Fu, who had just graduated from Pomona College as a physics student with a focus on astronomy. After months of applications, tests, interviews and evaluations, she was finally ready to begin researching stars and galaxies as a graduate student at the University of California, Berkeley.

At the same time, astronomers were designing a new astronomical instrument, one with abilities far beyond existing ones.

Scientists had spent nearly two decades developing the design of the Thirty Meter Telescope in Hawai’i. However, since 2014, their plans had been delayed. The construction site was located on Maunakea, a dormant volcano and sacred place for many Indigenous Hawaiians, who had resisted attempts for further development on the mountain.

On July 15, 2019, with a newly validated permit, the TMT collaboration was scheduled to begin construction once again. But peaceful protestors, who called themselves kia’i (protectors), blocked the road to the planned construction site.

Fu was following a Facebook livestream on July 17, watching in real time as law enforcement arrested Native Hawaiians on the summit. As an astronomer and human being, Fu couldn’t just stand by. She and Caltech graduate student Mia de los Reyes wrote an open letter calling for the astronomy community to recognize the broader context of the ongoing conflict.

“We write today not to place a value judgment on the future of TMT on Maunakea, but to question the methods by which we are getting the telescope on the mountain in the first place,” the statement reads. “We ask that the community pause and consider what it means that… the military and the police have become involved in the project’s deliberations with the protectors of Maunakea.”

Carnegie Observatories astronomer Josh Simon, who served as Fu’s undergraduate research advisor, says it was a gutsy move. “The University of California is one of the main and founding partner institutions of the consortium building the TMT. There are strong faculty supporters of the telescope project, so for her to publicly come out with a critical document immediately before she's moving there to start her program is something that took a lot of courage and that I think not many people would have been willing to do.”

Fu’s PhD advisor, UCB associate professor of astronomy Dan Weisz, says he wasn’t offended; he was impressed. “I have so much admiration for her speaking out about an issue she really cared about, even though she didn’t know whether it would be detrimental to her career.” 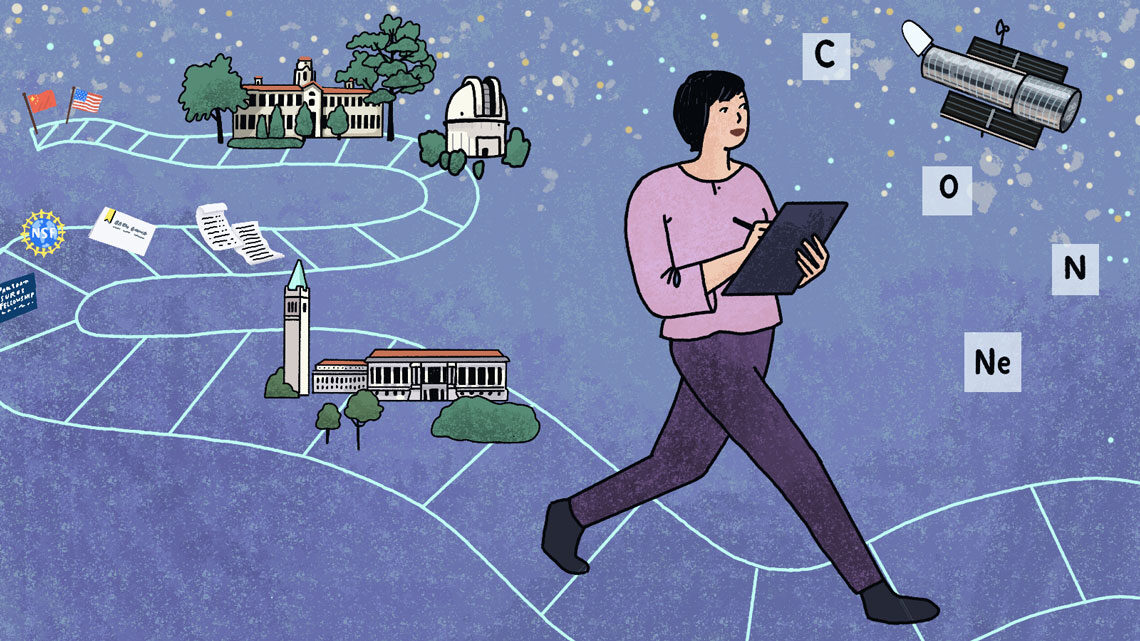 A path to physics and astronomy

Fu’s attention to the broader context of science can be traced back to her lifelong interest in the humanities.

Fu’s family moved to California’s Bay Area from China when she was 1. Throughout her childhood, her parents ran a local Chinese school and helped organize events for recent Chinese immigrants.

Growing up, she didn’t consider herself particularly devoted to STEM.

“Looking back now, I was obviously a capable STEM student,” she says, “But I invested a lot of my energy in other extracurricular activities such as speech and debate, writing, and music. Because I wasn’t the model STEM student, [at least] as elevated by mainstream messaging, I hadn’t conceived of myself as possibly being able to have a career in physics.”

When she started school at Pomona College in Southern California, she began to see a place for herself in astronomy. When she struggled, she found the support she needed within her physics department and at the Carnegie Observatories. “I think broadly, what worked for me in college was having a space to learn astronomy where I didn’t feel anxious that my failures would reflect back on me and my potential in any essentialist way.”

Studying astronomy at Pomona College meant majoring in physics with an astronomy focus. “Astronomy really is just physics but applied on cosmic scales, and there are a lot of applications,” she says. “Even though a lot of astronomy is done on the computer with various software packages… knowing the physics is still important for developing an intuition about what you’re studying—and making sure that the software and analysis tools you’re using are producing results that align with your intuition.”

Fu worked hard to learn as much as she possibly could, Simon recalls. “Every Monday, she would send me a long email saying, ‘This is what I want to accomplish this week.’ It was usually, ‘I want to make two plots.’ Then on Friday, she would come with five. She would always succeed in what she proposed, but also she was really good at taking feedback and immediately incorporating any criticism.”

Fu ventured beyond the boundaries of her courses, whether by checking out a graduate-level textbook to study outside of class or by learning from other scientists at the Carnegie Observatories, where she did her research. “While Dr. Simon is a great adviser, throughout my time at Carnegie, I was also able to talk to postdocs and other staff scientists,” she says. “I never worked on supernovae as an undergraduate, but I remembered reaching out to a supernova scientist to ask about his work, and he spent the morning teaching me a lot about transients. Everyone was always really happy to support me where they can.”

Fu says the experience taught her that doing scientific research required different skills than those required for performing well on tests.

“What’s fascinating about astronomy for me is we’re trying to piece together a story about how we got here,” she says. “Incidentally, a lot of the activities I pursued in my adolescence also prepared me for navigating the world of astronomy research… While understanding the physics is obviously important, research also involves a lot of creative thinking and drawing on big-picture knowledge to design observations and figure out what science is possible.”

In addition, research involves storytelling and visualization—to write proposals and communicate results—and people skills—to build relationships and work with collaborators. “There’s this stereotype of the lone scientist who runs complicated calculations and then knows clearly when the answer is correct over all other answers,” she says. “This is antithetical to how science is actually done, which is usually in community. Very few astronomy projects nowadays happen without a wide network of collaborators.”

Fu did well at Carnegie Observatories. By the end of her time there, she had published two first-author journal articles, given presentations at national conferences and won the Barry Goldwater scholarship, the National Science Foundation Graduate Research Fellowship and the PD Soros Scholarship for New Americans.

The human side of science

Now as a UC Berkeley PhD student, Fu studies the formation and evolution of nearby galaxies: near-field cosmology.

Researchers can’t observe the complete evolution of a galaxy—for the daunting reason that the scale of galactic change is far longer than a human lifetime. Instead, Fu looks at the metals in stars in search of the imprint of generations of evolutionary processes, such as matter build-up, supernovae explosions and star formation (and what happens when that stops).

The ultra-faint dwarf galaxies she studies, which are almost as old as the universe, often contain only hundreds of stars (compared to the billions in a typical galaxy like the Milky Way). Different dark matter particle candidate theories result in different distributions of structures in the universe. In this context, ultra-faint dwarf galaxies are an important test for small-scale predictions of competing dark matter models.

Fu studies these galaxies using narrow-band imaging data from the Hubble Space Telescope to measure the iron content in ultra-faint dwarf galaxies’ individual member stars. Using the distribution of iron in these stars, Fu aims to constrain the physics that drove the evolution of the early universe.

Recently, Fu was awarded 25 hours of observing time. She will use the same imaging technique to learn about the astrophysical processes that shut off star formation in two isolated dwarf galaxies. “The [Hubble Space Telescope] is best for this local work, because it traces the ultraviolet features that I'm interested in,” she says.

Fu looks forward to mentoring students as a principal investigator. “Mentorship continues to be a pivotal part of my growth as a scientist. I hope to continue paying this forward by supporting the astronomers who come after me.

“Once I start working with students, it is important to me that they have access to a variety of communities that they can grow within—with scientists in their research group, their institutions and in the field more broadly.”

It’s all part of Fu’s commitment to considering the human side of science.

“I continue to learn immensely from ongoing advocacy work in the astronomy community, particularly led by Black, Indigenous and Latinx astronomers,” she says. “I am also indebted to the legacy of organizing work by scholar-activists who are aligned with gender studies, disability studies and ethnic studies disciplines, including Asian American studies.

“I first came to astronomy through the deeply human characteristics of awe and curiosity—and fascination with how [astronomy] places our existence in a particular cosmic context. Now, as an academic astronomer, I think it’s paramount that we place reckoning with the human contexts of our science as central to our discipline’s ethos.”