What can particles tell us about the cosmos?

The minuscule and the immense can reveal quite a bit about each other.

In particle physics, scientists study the properties of the smallest bits of matter and how they interact. Another branch of physics—astrophysics—creates and tests theories about what’s happening across our vast universe.

While particle physics and astrophysics appear to focus on opposite ends of a spectrum, scientists in the two fields actually depend on one another. Several current lines of inquiry link the very large to the very small.

The seeds of cosmic structure

For one, particle physicists and astrophysicists both ask questions about the growth of the early universe.

In her office at Stanford University, Eva Silverstein explains her work parsing the mathematical details of the fastest period of that growth, called cosmic inflation.

Scientists think that after the Big Bang, the universe cooled, and particles began to combine into hydrogen atoms. This process released previously trapped photons—elementary particles of light.

According to scientists’ models, a pattern that first formed on the subatomic level eventually became the underpinning of the structure of the entire universe. Places that were dense with subatomic particles—or even just virtual fluctuations of subatomic particles—attracted more and more matter. As the universe grew, these areas of density became the locations where galaxies and galaxy clusters formed. The very small grew up to be the very large.

Scientists studying the cosmic microwave background hope to learn about more than just how the universe grew—it could also offer insight into dark matter, dark energy and the mass of the neutrino.

“It’s amazing that we can probe what was going on almost 14 billion years ago,” Silverstein says. “We can’t learn everything that was going on, but we can still learn an incredible amount about the contents and interactions.”

For many scientists, “the urge to trace the history of the universe back to its beginnings is irresistible,” wrote theoretical physicist Stephen Weinberg in his 1977 book The First Three Minutes. The Nobel laureate added, “From the start of modern science in the sixteenth and seventeenth centuries, physicists and astronomers have returned again and again to the problem of the origin of the universe.”

Searching in the dark

“Dark matter makes up most of the matter in the universe, yet no known particles in the Standard Model [of particle physics] have the properties that it should possess,” says Michael Peskin, a professor of theoretical physics at SLAC. “Dark matter should be very weakly interacting, heavy or slow-moving, and stable over the lifetime of the universe.”

There is strong evidence for dark matter through its gravitational effects on ordinary matter in galaxies and clusters. These observations indicate that the universe is made up of roughly 5 percent normal matter, 25 percent dark matter and 70 percent dark energy. But to date, scientists have not directly observed dark energy or dark matter.

“This is really the biggest embarrassment for particle physics,” Peskin says. “However much atomic matter we see in the universe, there’s five times more dark matter, and we have no idea what it is.”

But scientists have powerful tools to try to understand some of these unknowns. Over the past several years, the number of models of dark matter has been expanding, along with the number of ways to detect it, says Tom Rizzo, a senior scientist at SLAC and head of the theory group.

Physicists are also actively hunting for signs of dark energy. It is possible to measure the properties of dark energy by observing the motion of clusters of galaxies at the largest distances that we can see in the universe.

“Every time that we learn a new technique to observe the universe, we typically get lots of surprises,” says Marcelle Soares-Santos, a Brandeis University professor and a researcher on the Dark Energy Survey. “And we can capitalize on these new ways of observing the universe to learn more about cosmology and other sides of physics.” 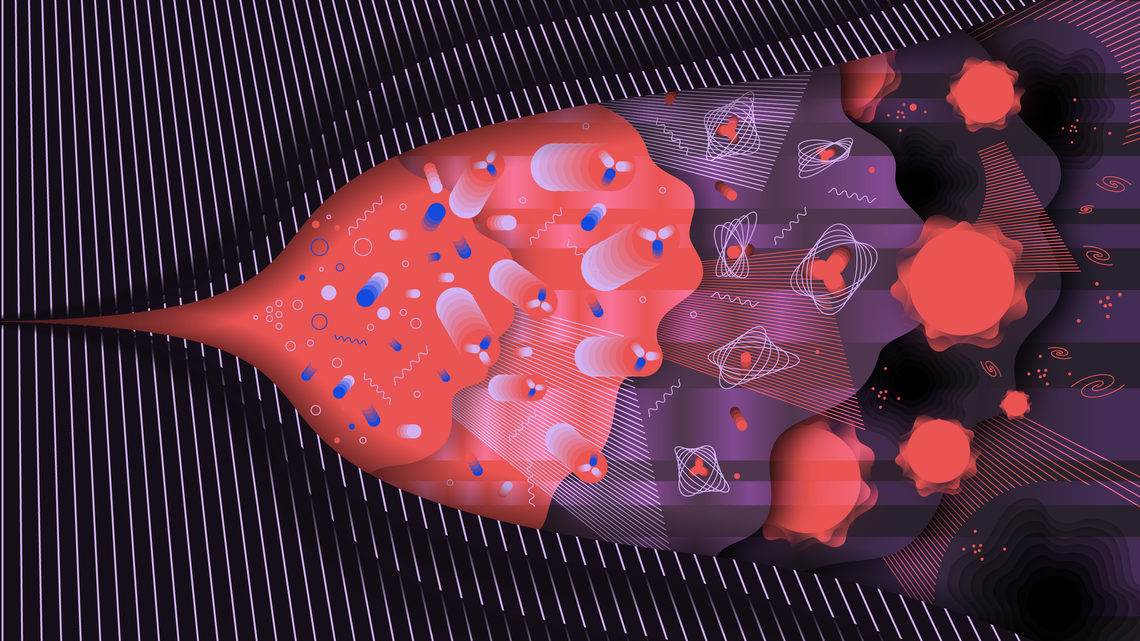 Particle physicists and astrophysicists find their interests also align in the study of gravity. For particle physicists, gravity is the one basic force of nature that the Standard Model does not quite explain. Astrophysicists want to understand the important role gravity played and continues to play in the formation of the universe.

In the Standard Model, each force has what’s called a force-carrier particle or a boson. Electromagnetism has photons. The strong force has gluons. The weak force has W and Z bosons. When particles interact through a force, they exchange these force-carriers, transferring small amounts of information called quanta, which scientists describe through quantum mechanics.

General relativity explains how the gravitational force works on large scales: Earth pulls on our own bodies, and planetary objects pull on each other. But it is not understood how gravity is transmitted by quantum particles.

Discovering a subatomic force-carrier particle for gravity would help explain how gravity works on small scales and inform a quantum theory of gravity that would connect general relativity and quantum mechanics.

Compared to the other fundamental forces, gravity interacts with matter very weakly, but the strength of the interaction quickly becomes larger with higher energies. Theorists predict that at high enough energies, such as those seen in the early universe, quantum gravity effects are as strong as the other forces. Gravity played an essential role in transferring the small-scale pattern of the cosmic microwave background into the large-scale pattern of our universe today.

“Another way that these effects can become important for gravity is if there’s some process that lasts a long time,” Silverstein says. “Even if the energies aren’t as high as they would need to be to be sensitive to effects like quantum gravity instantaneously.”

Physicists are modeling gravity over lengthy time scales in an effort to reveal these effects.

Our understanding of gravity is also key in the search for dark matter. Some scientists think that dark matter does not actually exist; they say the evidence we’ve found so far is actually just a sign that we don’t fully understand the force of gravity.

Learning more about gravity could tell us about the dark universe, which could also reveal new insight into how structure in the universe first formed.

Scientists are trying to “close the loop” between particle physics and the early universe, Peskin says. As scientists probe space and go back further in time, they can learn more about the rules that govern physics at high energies, which also tells us something about the smallest components of our world.

Artwork for this article is available as a printable poster.

Learn more about one of the most sought-after substances in the universe.

The answer has to do with dark matter’s role in shaping the cosmos.

Even experiments that aren’t looking for dark matter directly could give us hints about the mysterious substance that permeates our universe.

What dark matter is (probably) not

No one knows for sure what dark matter is. But we know we need something to explain what we see in the universe, and we’ve crossed a few ideas off of our list.

What we know about dark matter

Although scientists have yet to find the spooky stuff, they aren’t completely in the dark.

The other dark matter candidate

The Large Synoptic Survey Telescope will be named for an influential astronomer who left the field better than she found it.

Until recently, scientists had never detected black holes in the “mass gap”—now, particle physicists are exploring ideas beyond the Standard Model that could explain them.

The first undergraduate on the Event Horizon Telescope to receive junior collaborator status thrives in the unknown.

The Large Synoptic Sky Survey will collect so much data that data scientists needed to figure out new ways for astronomers to access it.

With installation near completion, the new sky-surveying instrument has begun final testing.

The Cherenkov Telescope Array will combine experimental and observatory-style approaches to investigate the universe’s highest energies.